Summer Witnessing Campaign is defined as an "all out effort over a period of time where all personal interests and social interests, etc. are subordinated to the preaching of the Gospel, with as much energy as can be given to the task." These past six weeks have been just that. I have exhausted all of my strength (and have had to heavily rely on God's) to raise the image of Christ this summer.

I had been told stories of past Campaigns, so I had some idea of what to expect, but I jumped in with no idea of how God would truly use me this summer. But God is good, and he taught me many things about myself and my position in His Kingdom.
I've learned about being vulnerable. I've learned how to share my faith with anyone and everyone. I've learned about emptying myself so I can be filled with God. I have been affirmed that God has a plan for my life, and that He will fulfill His purpose for me (Pslam 138:8, my life verse this summer!). I have learned what it means to commit my way to the Lord, and fully rely on His strength. I have seen the power of prayer and the power of community. I have also seen the influence of the Enemy when we are not secured in the Armor of God.
I have seen God do miraculous things in the hearts of people, and I know He is moving in my own heat as well.

If it had been my choice, I would have come to to New York as a steward, not as a Campaigner. I would have been able to use my gifts of service . . . behind the scenes. But God knew what I needed. He pushed me out of my comfort zone and paved the way for me to serve as a "Campaigner" this summer. I would have never imagined that I would be able to go out on four Sorties a day (two rush-hour, and two "contact") for four weeks--standing out on street corners and in subway stations, proclaiming Jesus as the Messiah and engaging people in conversations about who He is.

From these experiences I have gained new confidence as a citizen of God's Kingdom. God has shown me that He will use what I bring, what I have to offer. I persevered through all the Sorties, and I am truly thankful for those experiences, but God also enabled me to take part in some creative evangelism.

I was fortunate to help create a new "Facebook" broadside. 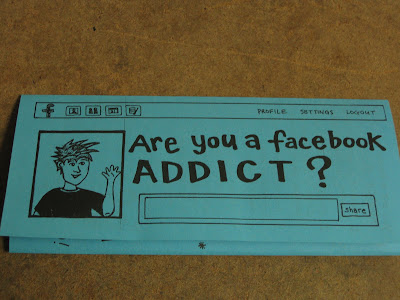 My friend Morgan wrote the text, and I did the illustrations. It was so fun to but my gifts to use, and see the fruit of our labors. Younger people, especially younger Jews who often wouldn't give us the time of day, were more willing to take our literature because it reflected a trend that was relevant to them.

Our last week of Campaign involved a variety of creative Sorties. We had a brainstorming session, discussing different ways we could pass out broadsides and be visible to the people of New York City. Out of this session came the idea to do a visibility Sortie at the Metropolitan Museum of Art. I jumped at the idea and was put in charge of creating a tour through the museum. 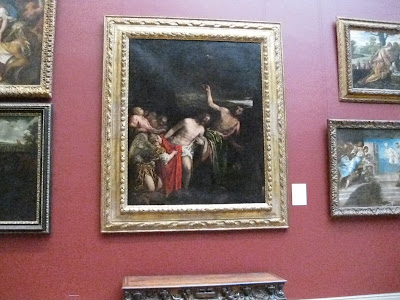 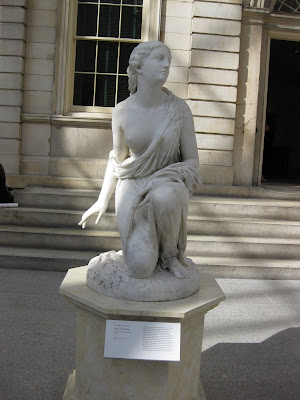 Focusing on four different pieces, I wrote a Bible Study that explained the aesthetics, outlined their Biblical basis, and involved reading Scripture out loud. Some of us were wearing Jews for Jesus t-shirts, while the rest served as "ringers." It was invigorating to "proclaim the Gospel" in the galleries, and at the same time "expertly" discuss the pieces in front of us.

So now Campaign is over. I cannot believe how quickly time flew! I have made some lasting friendships and seen God's hand at work in my life. 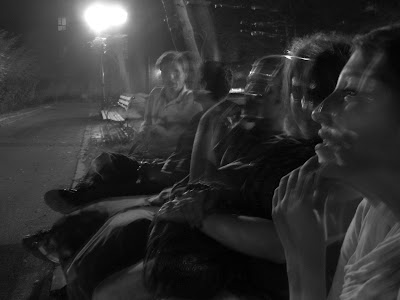 I could not ask for a more growing summer. But now it's time to go home. Now it's time for the hard part: taking what God has taught me and putting it into practice in real life. I will return to Chicago in a week (I'm staying in NYC a week to do the sight-seeing thing). I'll be returning to friends and work, but this next season will be one of transition. My prayer is that I truly seek after God's will as I step out in faith once again and enter the career world.

Thank you all for your prayers and financial support this summer. God is truly moving in this place!
Posted by Rebecca at 9:50 PM No comments:

Summer Update: Commit to the LORD whatever you do . . . 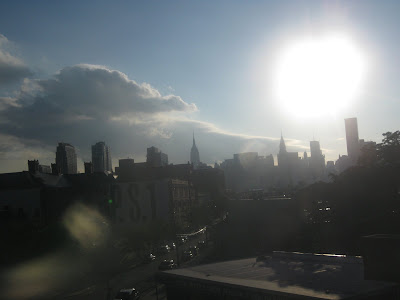 A couple days ago I woke up early to have some quiet time with God. Our days have been so full and I have been so exhausted that I have not devoted that time to God the way I should. On that particular morning I chose Pslam 16. Even though I am pretty much always unfaithful in my quiet time. God is always faithful when we come to Him. I read these words of truth:
"Commit to the LORD whatever you do, and your plans will succeed." Pslam 16:3

That word commit . . . I'm not a Biblical scholar, I can't tell you what the word is in Hebrew, Greek or German, but I do know that it is a powerful word. It involves more then just praying that God will help us through situations, it is really placing the whole thing in His hands and saying, "Use me, I trust in your plan."

In verse 9 the Psalmist goes on to say, "In his heart a man plans his course, but the Lord determines his steps."
Here on Campaign we are each divided into teams with two to three members and a team leader. What I've learned these last few weeks is that following is hard. It doesn't matter if you are an independent minded person like myself, or a born follower, walking in the footsteps of another takes a lot of faith.

I so easily fall into my own steps, forgetting that I am to be following the One who has determined my steps from the very beginning. I am so inclined to set out on my own, but living in community here has been a great lesson in teamwork and following. Without these, we would not attain our goal.

These past few weeks, the monotony and intensity of Campaign has begun to feel normal. But out int the real world, away from these crazy schedules and ascribed community, Jesus has called each of us to follow Him. To commit to Him our very being--all our plans, hopes and dreams. After Campaign ends in one week, I am jumping into the unknown. I can say I have plans, but really I am stepping out in faith to what God has for my future. While the world views this mindset as weakness, I know (and am continuing to learn in our daily devotions and chapels) that in following Christ I can find freedom. For "whoever gives heed to instruction prospers, and blessed is he who trusts in the Lord" (Psalm 16:20).

Campaign is almost over, but that does not mean God is done working. He has been showing me the work He is doing in my life, and the ways I am being molded for His purposes. My prayer is I will truly follow God's lead from this season to the next, and trust in His guidance--especially when I cannot see the path ahead. 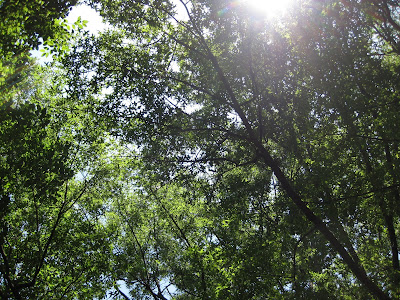 Posted by Rebecca at 8:15 AM No comments:

Summer Update: "Rid me of myself, I belong to you"

Going out on sorties (when we handout our Gospel broadsides) is kind of like rapid-fire people watching. It's so interesting watching all the different kinds of people walk by. Some are interested in taking our broadsides. Some are even interested in engaging in conversations, or even just arguing. But most of them have their game-faces on--attempting to make their journey from here to there with as little communication, emotion, and especially vulnerability as possible. But unlike them, our business is vulnerability.

During training we learned the "go and tell" vs. the "come and see" method. We learned the importance of puttng ourselves out there to raise an image of Jesus Christ and tell people about the One who placed Himself in the most vulnerable position of all. . . just for us. We walk around in t-shirts that say "Jews for Jesus," proclaiming boldly our identity and message. As we do, we invite others to answer the question, "Who do you think Jesus is?"
What if everyone chose that kind of boldness?

Many people walk around with identity markers. For some it is a necklace; for others it's an image in a t-shirt. I have encountered many people so far who wear a cross or a Star of David around their neck, but it means nothing to them personally. Maybe it's a symbol of how they grew up, or a family heirloom. But I choose to believe that it is just an excuse so they don't have to explain what they really believe.

We go out to the streets, down to the subways, and into the parks, but we go as ambassadors of Christ. We are His hands and feet, His mouthpiece to those who are willing to hear God's message of Truth. My favorite line of that song is where it says, "Rid me of myself, I belong to you." That is my daily prayer: that God would truly rid me of my own selfish desires and weaknesses, that my identity would be like that of Jesus. As the people I am "people-watching" watch me, I don't want them to see a weak and weary servant, but the Light of Christ alive in me.
Posted by Rebecca at 8:42 PM No comments: 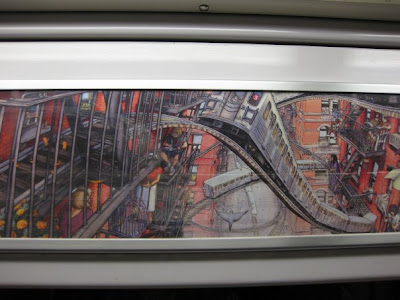 In C.S. Lewis' The Silver Chair, Jill Pole and Eustace Scrubb are sent on a quest by Aslan the Great Lion. They are given four signs to guide them. They see the third sign outside the remains of a giant city: the giant words carved into the stone, "UNDER ME."

This past week, we have spent countless hours handing out thousands of gospel tracks in New York City's subway system. Dank and dirty, these underground tunnels corral the people of New York from point A to point B, from train to train, from entrance to exit. Marching along in their daily monotony, most of these people do not expect to encounter Jesus, much less anything that would get in their way. But there we are, dressed in t-shirts proclaiming "Jews for Jesus," anxiously awaiting a willing hand to accept our message of Truth.

As much as I these underground excursions are not my favorite, I am reminded of Jill and Eustace's adventure. To complete their task and find the truth, they had to journey under the ruined city. Likewise, we venture from "top side" to "bottom side" to meet those who need Jesus. We go down to the darkness to bring people the Light.

No matter how mediocre or frustrating a outing may be, I know that God's hand is at work in each and every track that gets handed out and each conversation that is exchanged. My prayer is that I might be able to see some of the fruits of our labor here in NYC. Please continue to pray for all of us as we go out on the streets and in the subways--for strength, energy, courage and wisdom to tell people about the Good News of Jesus Christ.
Posted by Rebecca at 9:53 PM No comments: 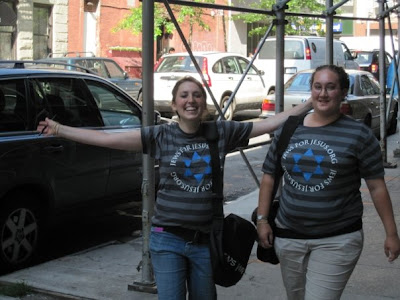 My 1st week team leader Liz and I returning from a sortie.
Posted by Rebecca at 11:25 PM No comments: