The other night I sat scouring the internet for history websites and blogs; job hunting and searching for potential places of employment. I am very familiar with the Website --> About Us -->Employment Opportunities/Jobs obstacle course.
But one thing I noticed.
In the news, the world is falling apart. Pop-culture pages find mindless things to smile about, telling us stories of Angelina Jolie’s nannies and the next teenage heart-throb.  On the other end of the spectrum (though maybe not far removed from our society’s current obsessions), history blogs have sky-rocketed. They are flourishing, in fact.  At first glance, I am overjoyed. People are finally interested in history! But wait a minute—people are finally interested in history . . .  The unfortunate side of things is that retrospective tendencies tend to develop at the end of a great thing. One must wonder what this says about our culture; what ideas go racing through the minds of the human race.
It is possible that I am just more attuned to all things “public history” since receiving a degree in that field. Maybe things have always been this way. But I think not. Looking back, the world (or at least the Western world) has been very focused on dreaming ahead. For centuries peasants and kings have eloquently prophesied about how the future would look, sound, feel.  Just look at the works of authors like H. G. Wells, George Orwell, Jules Verne and Edward Bellamy.
As I sift though pages and pages of “history” and “public history” blogs, I can’t help thinking that an intense focus has shifted to an understanding of the past.  Too see where we have come; to give an account of what has already happened. It’s a little overwhelming if you think about it for too long. But mostly it’s fascinating—what the human mind will do for the sake of self preservation.
Posted by Rebecca at 8:28 PM No comments: 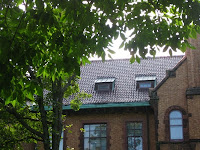 On Saturday I did Public History. Well, that’s actually an odd way of putting it. I should probably think of a better way to express my adventure.  Another time, maybe. For now, let me tell you about my Saturday. 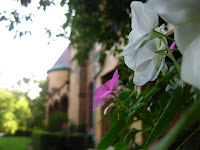 Most of the time I am on the receiving end of public history. In and of itself, it is a beautiful thing, but that is not what I spent countless hours studying. I’m sure there are classes on how to be a better recipient of public history (in fact I can point out quite a few people who would benefit from such a class), but that is far removed from the point. The point:  I got to do public history this weekend! 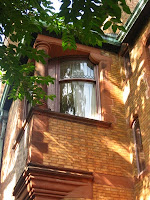 A couple years ago the Evanston History Center was forced to close due to ownership and financial negotiations with Northwestern University. Prior to that time, I served as a weekend docent at the Dawes House. On Sunday afternoons, while many people would rather be taking a nap, I sat at the front desk of a majestic mansion on Lake Michigan, waiting for unsuspecting people to walk up to the front door and ask to take a tour. I enjoyed showing people the house; spewing useful facts about Dawes, 1920’s American society and European architecture, maybe throwing in a tidbit about Lincrusta Walton or annunciators. But I don’t think I really appreciated what I was doing. At that time, I was in the midst of obtaining my degree. Every bit of “Public History” I was doing was for an assignment. 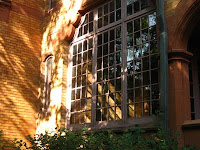 Yet on Saturday, after a year away from the house and couple recent weeks of patron-less desk-sitting-sessions, I got to share my passion for history with ten random people. It was hot and muggy; I was sweating from every possible pore, and I’m sure they were as well. But do you know the joy I felt as I closed the door after the last visitor had departed? I was expecting to feel relieved that I could sit still in front of the fan, or at the very least get a drink of water. I was not expecting to have such happiness over a 45-minute tour through a turn-of-the-century mansion. 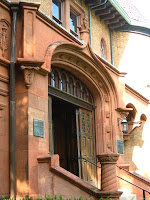 So what would any up-and-coming Public Historian do in such a situation? She would plop back down in that squishy desk chair and start designing a business card. Call me crazy, but it seemed appropriate. And I was in an artsy mood. Needless to say, I have a design, and I’m quite excited. Now I just need to have them made, preferably free of charge.
But one thing at a time. I was not done with my Public History adventure. Nope, not yet. For in addition to it being sweltering hot, it was also a beautiful day. And that meant my camera had to come out of its cozy crocheted traveling case. Walking around the outside of the Dawes House is blast to the past all in itself. From a crumbling terrace to mossed-over flower planters, the façade and exterior exude pride and the desire to be remembered. I took some pretty fun shots, allowing my camera’d eye to see the house from a new point of view. I doubt Robert Sheppard dreamt of a time when the study of his glorious home would be considered History. Charles Gates Dawes on the other hand—he was pretty brilliant. With amazing foresight, he bestowed his home to be used for historical purposes. And that is just what I did!
I guess I should be thanking the man.
Posted by Rebecca at 11:21 PM No comments: