Thoughts from the Practicum


Prac·ti·cum: a practical section of a course of study.

This summer I’ve been doing a practicum at the Evanston Public Library. I’m there one day a week, and most of that time is spent observing or participating in the library’s various summer programs for children and teens. Last week I had the opportunity to jump in a bit and help. 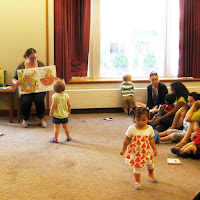 I began the day by reading a book about vegetables to a room full of 40 toddlers and their caregivers. It was fun, and I can totally imagine myself running a program like this in the future. It combines the right amount of creativity, management, and children-adult interaction that gets me excited for my future as a children’s librarian. But what really got me excited happened later in the day. In two different instances, I encountered children who probably wouldn’t be in the library except for the organizations and programs that brought them there– programs known for supporting library-use and summer reading. 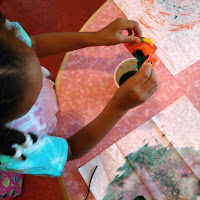 First the Evanston YMCA and Y.O.U. summer camp brought in a couple dozen kids for a drop-in craft time. It was chaos, but in the most perfect way. The kids were engaging with the activity, asking for help, and trying with all their might to create a beautiful coffee-filter butterflies. As I jumped around instructing and assisting, my hands became messy with colorful marker residue, but this momentary interaction with each child was a genuine way to show mutual respect, care, and responsibility.

A few hours later, the Evanston YMCA and Y.O.U. (this time in conjunction with a summer reading initiative sponsored by a Evanston foundation formed in the memory of a local boy who was tragically killed in 2013) brought about 60 kids to hear this year’s Newbery award winning author Kwame Alexander talk about his new book, “Crossover.” Honestly, I don’t think I’ll be able to get into the book, it’s written in verse and is a little hard to follow. But it is a very timely – a quintessential book of the contemporary African American youth experience. As Kwame was talking about the book and the process of writing in general, he said he didn’t set out to change the world when he wrote the book (a few dozen versions, actually, before he was able to get it published), but now that he is seeing its impact, he is taking the message and running with it. “The world needs to know what there are black boys like this,” he said. 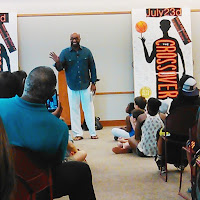 Kwame is an effective champion of reading, creativity, poetry, and the diverse human experience. His message that day focused on the importance of saying YES in the face of adversity, and it was very clear that he wants both girls and boys to enjoy reading. I was astonished to see young boys and girls of every color engaged in what he was saying and actually asked questions about the book. They related to it, and they related to him, who spoke both candidly and at their level. It was beautiful.

When it comes to issued of equality and rights, I am often a quiet advocate, not feeling the need to raise my voice very loudly, and also not knowing when it’s the best time to jump in. But days like this make me want to tell everyone I know about the small ways lives are being impacted by the power of books. The group of people in that room were as diverse as they come, both in skin color, socio-economic background, and education, but the fact that they were all brought together through the commonality of reading is a really encouraging thing to see. There’s that saying that it “takes a village to raise a child,” well, I was seeing an example of a community clearly coming together for the betterment of its young people.

When I first moved to Rogers Park I helped out a lot with my church’s youth group. It was a group made up of neighborhood  elementary and middle schoolers. I got to know kids I would have never met before. And I learned a lot about how issues of race and socio-economic status effect the kids in this neighborhood. That group of kids no longer exists within the four walls of our church, but my heart still breaks for those kids and their daily struggles. So many are effected by broken homes and gang violence. So, to see a group of kids, only a few miles north of Rogers Park, with so much support and encouragement, it makes me want to take part again – but this time as a librarian.

Posted by Rebecca at 5:50 PM No comments: